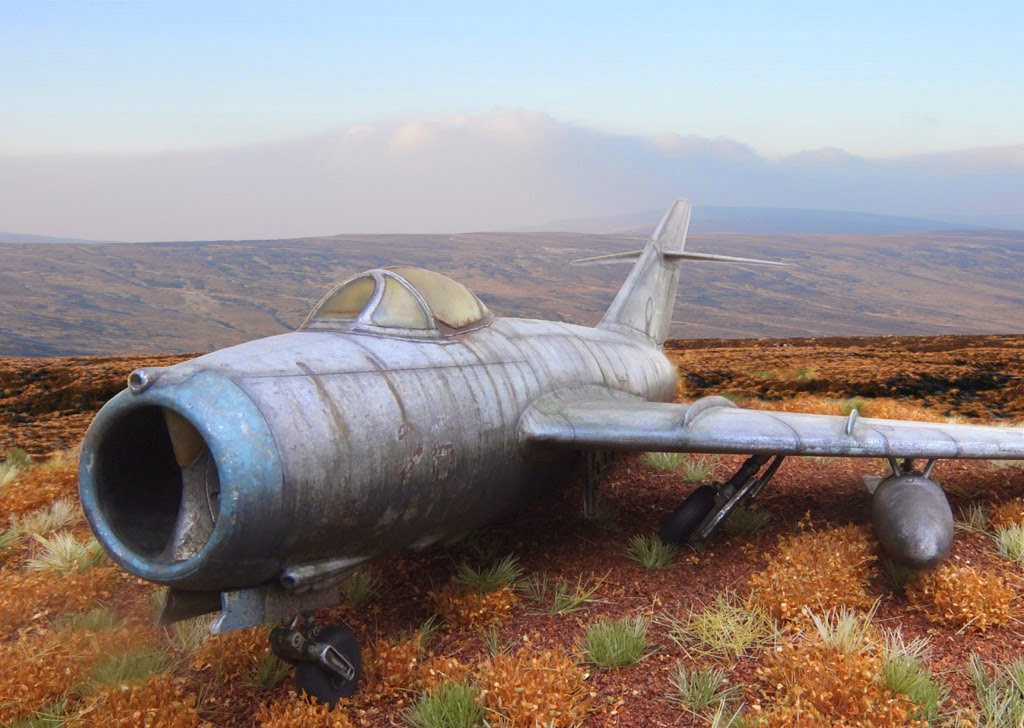 I’ve always wanted to try to build a heavily weathered, bare metal aircraft. I had Tamiya’s Mig 15 Bis Clear edition sitting on my shelf for years, gathering dust. It was probably one of the first kits I purchased when I took up this hobby 3 or 4 years ago but I never really took to.
With no specific strategy in mind for the paintwork I pressed on with the build stages and wasn’t disappointed with the usual Tamiya fit and finish. The outer fuselage was particularly well moulded but did lack some finer detail.
I purchased some “Rosie the Riveter” wheels to add further rivet details on the fuselage and while waiting for them to arrive I bashed on with the cockpit. This was a basic affair out of the box so I set about applying the science of “gizmology” or “ adding bits of old parts and sprue to make it look sort of appropriate and more detailed”. 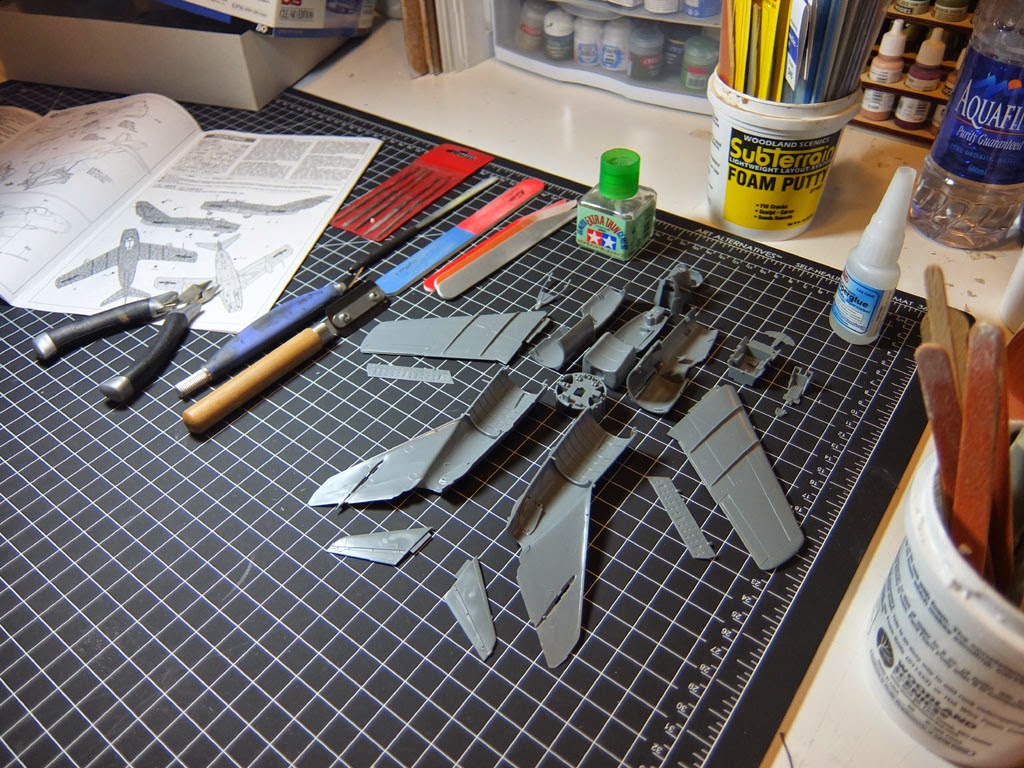 Parts laid out and ready to assemble 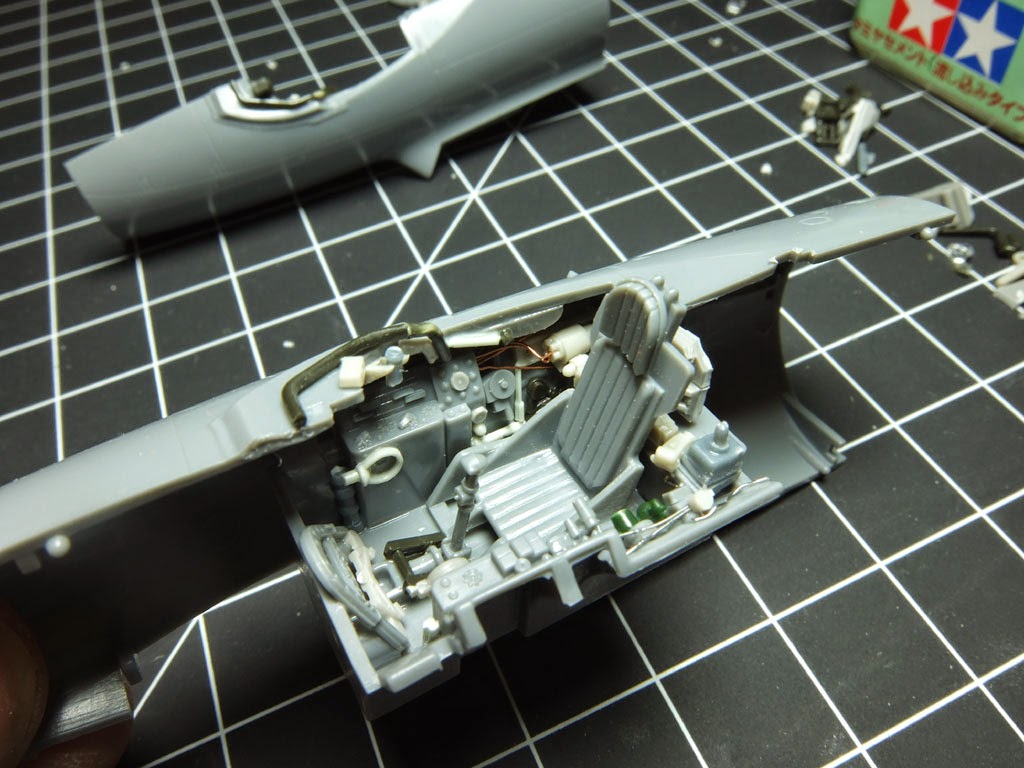 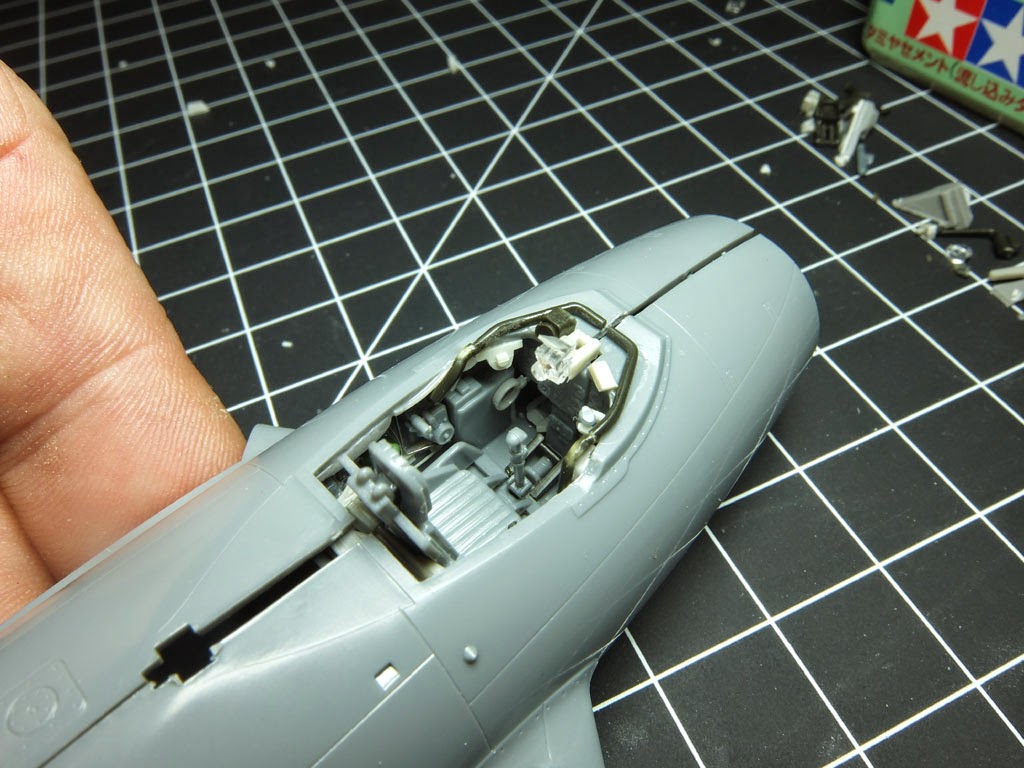 
In addition to the cockpit I also added the de-humidifying pipes and scratched up a more believable gunsight from sprue and old parts I had lying around.


Then the cockpit got a spot of paint and weathering to represent an old and well worn workplace. This, of course, was all pretty much a waste of time as the canopy would be fogged from age, obscuring all the details inside. At least I’ll know it’s there right? 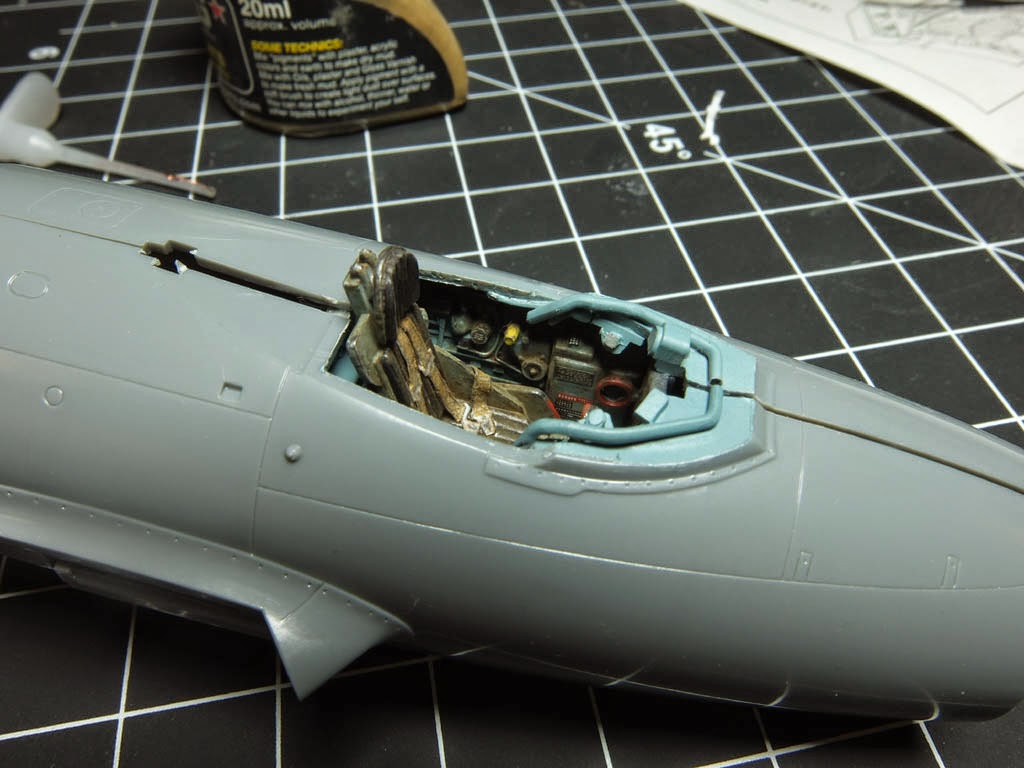 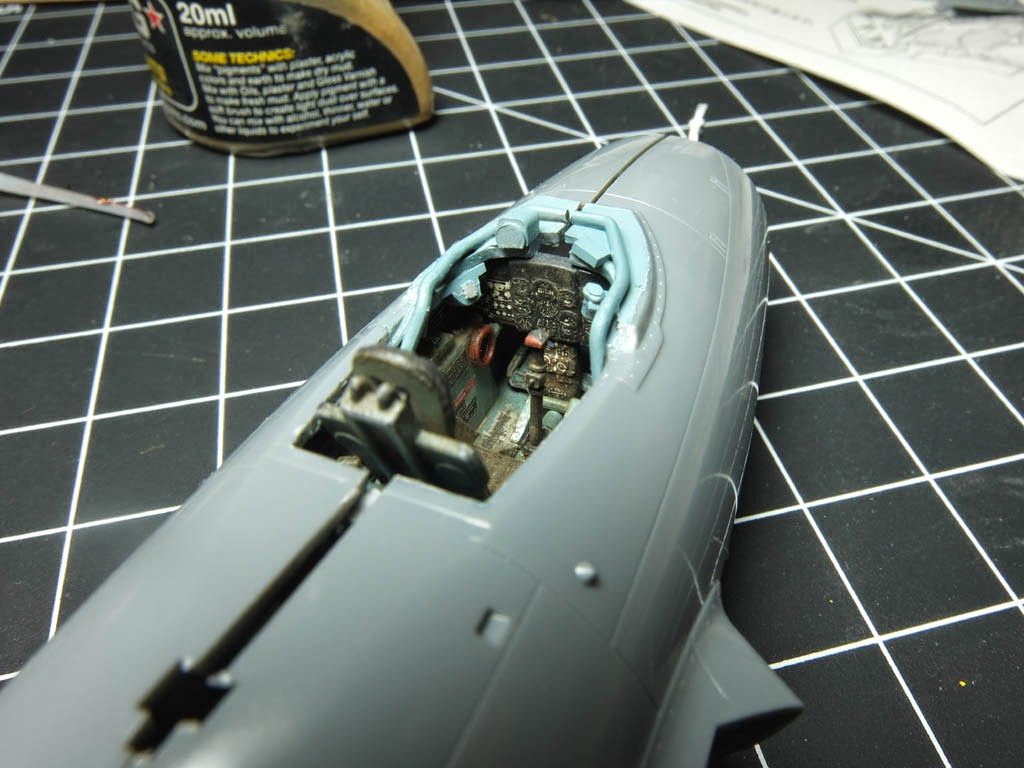 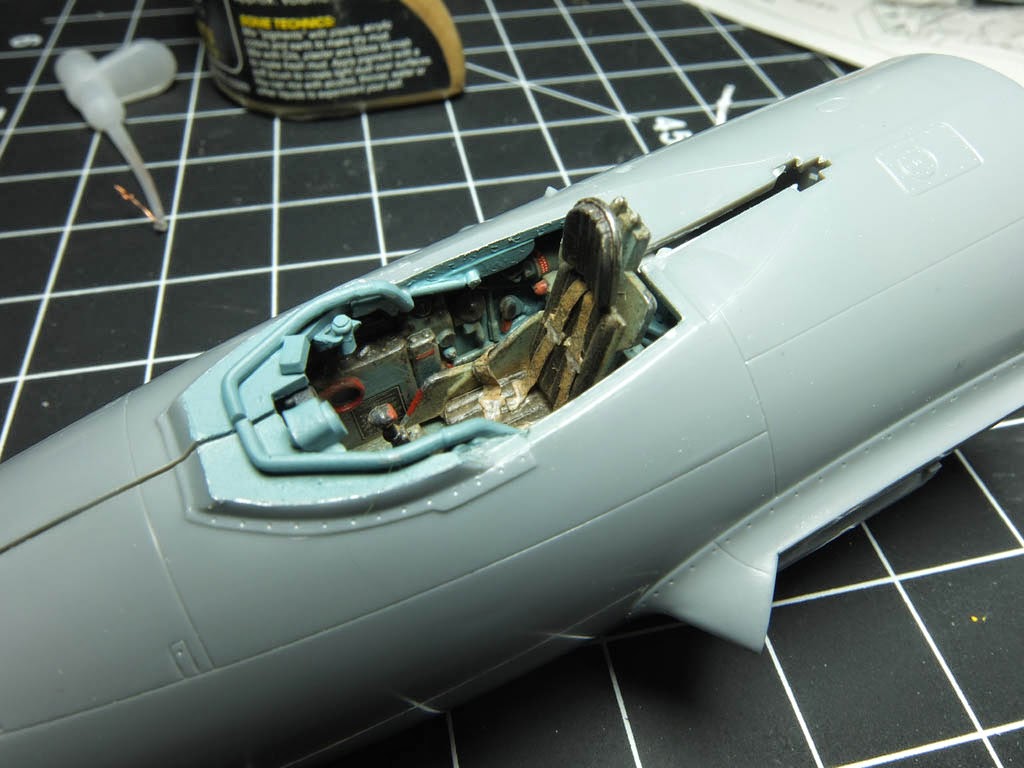 Painted cockpit installed. Belts were paper prints from a photoshop master I created.

The kit comes with a nicely detailed engine. However, I didn’t want to depict the Mig split in half in this instance so elected to tack the front and rear fuselage halves together so I can go back and do the engine some real justice in the future. 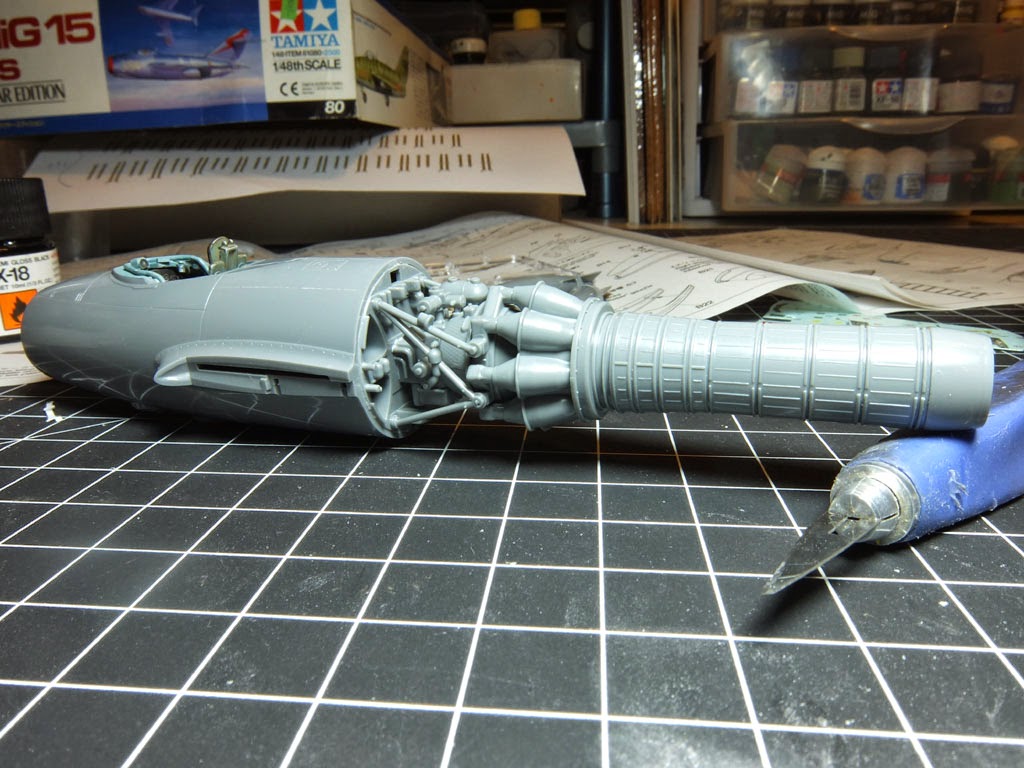 Once the major elements were prepped it was time for final assembly. The canopy was masked and smaller parts, like landing gear, fuel tanks and nose cowling, were set aside for painting later.. 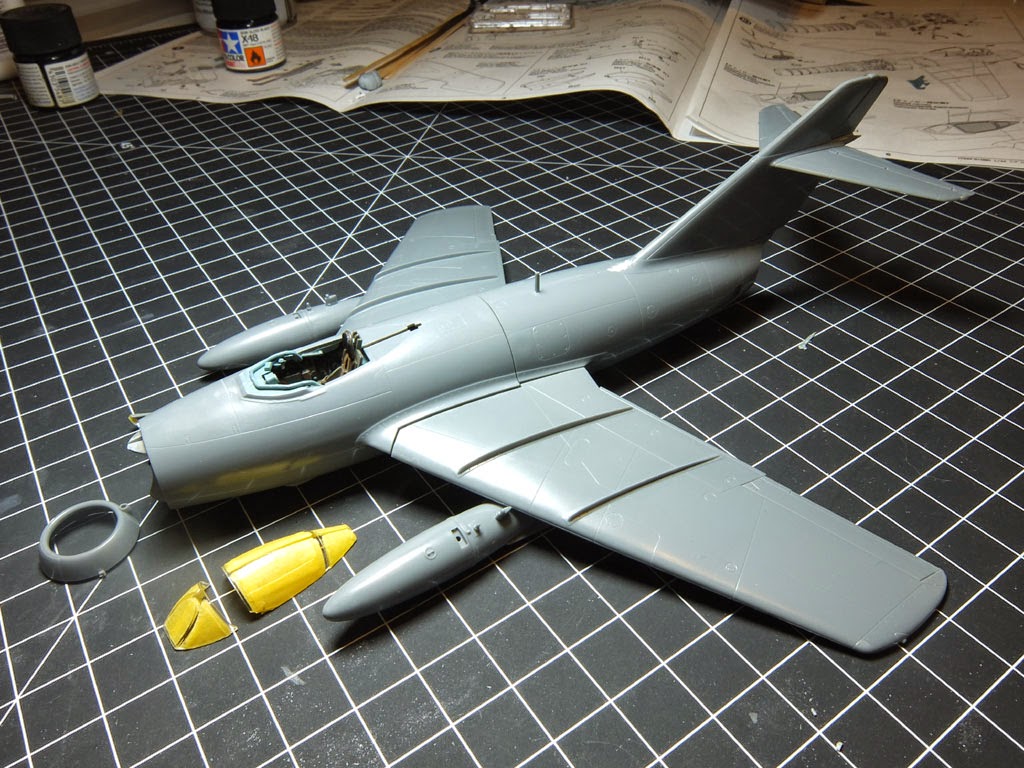 There are many reference images available on the net for abandoned aircraft but I was looking to create something that showed off the look of old aluminium metal rather than the usual depictions in models of shiny bare metal with variegated panel shades.
I found the below pic and thought it might be possible to get close. 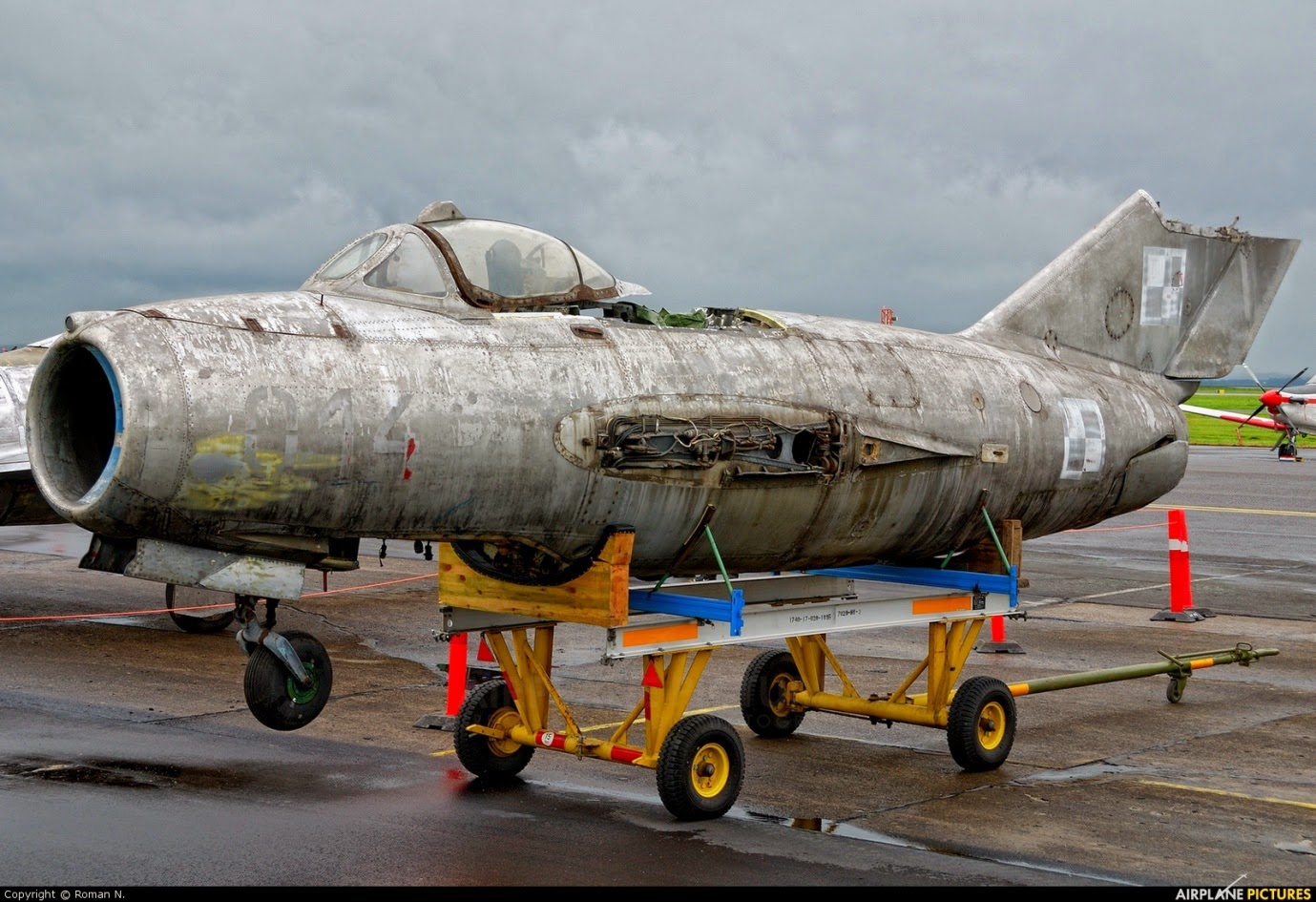 I used Titanium paint over a Mr Surfacer 1200 primer which was lightly sanded back for a smooth base. The rosie riveter tools also arrived so I set about adding rivet lines in appropriate places, with a spot of guesswork too. 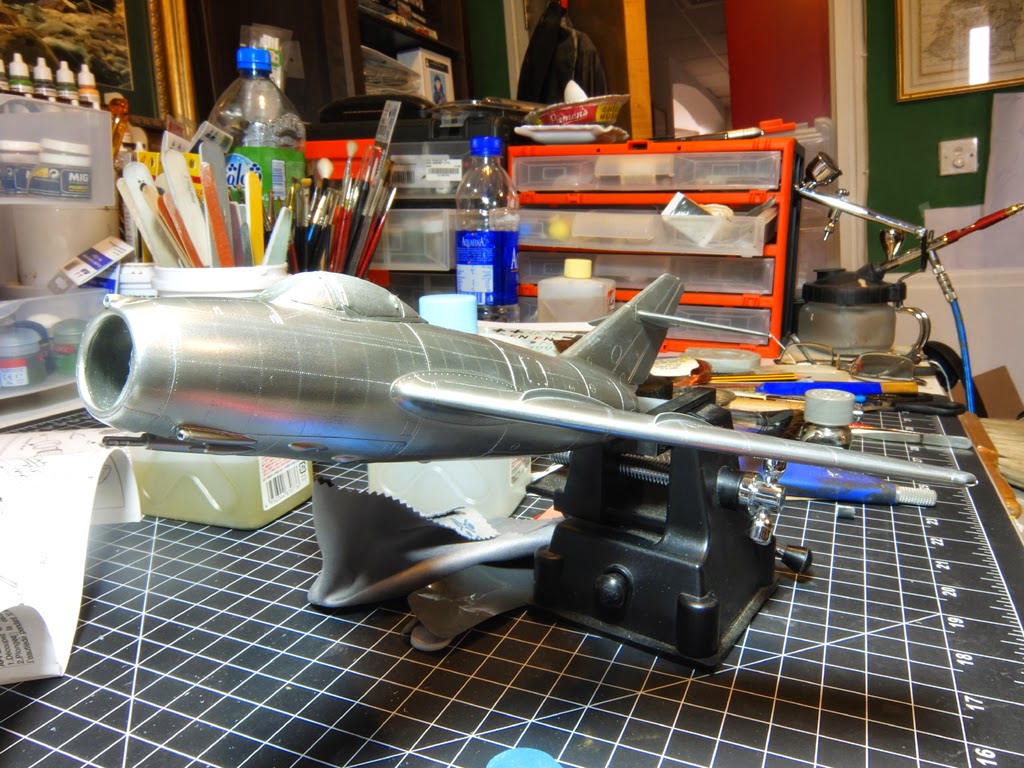 Sadly I didn’t take any step by step pics of the actual paint and weathering stages as I get so involved in the process that I often forget. It is also pretty difficult to remember exactly what steps and sequences I applied the different mediums used.

The titanium basecoat was spotted with medium sea grey enamel applied with a sponge and then rubbed over with dark pigments. This was then sealed with klear and the number decals added. These were then weathered with sanding sticks and scalpel to create the chipped worn effect. After resealing the decals I then added a lighter overspray of titanium mixed with white and a touch of buff.

Then the panel lines and rivets received a thin wash of AK Interactive’s engine grime, followed by a delicate brush over with dark pigments. This was then resealed with a matte varnish ready for more filters and washes. I also used an overall dark wash with Flory products and this was left to dry for a few days.

Once the washes were fully dried I began to rub back some of the flory wash with a dampened Q-tip to get some streaking in the lower fuselage. This was accentuated with further streaks of AK’s engine grime applied with a thin brush. Further details were added with the AK engine grime around rivet and panel lines and subtle use of the AK slimy green wash was used to create small areas of algae build up. 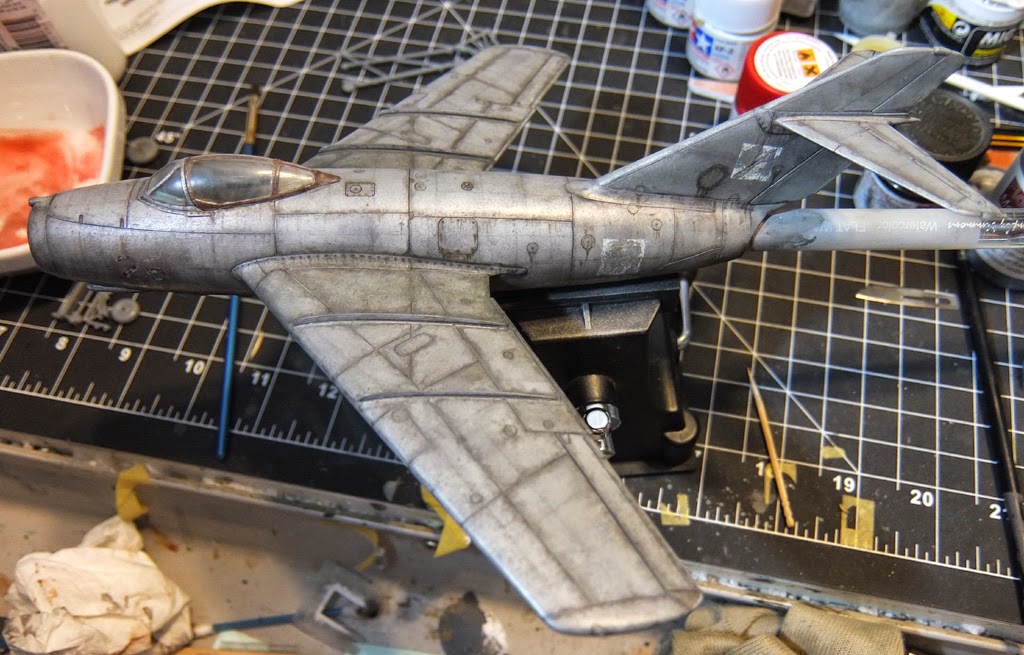 
Final steps included using some green chalk powder to add some green tinges to the wing surfaces and tail uprights and then the front cowling received an overspray of light blue acrylics which was then chipped back with water for the old paint look.

AK Interactive rust washes were added around the canopy frames and panel lines and the whole build received a final coat of Matte varnish.

The finished build was placed on a simple pre-made ground cover sheet, glued to a cut MDF base.
Here’s the final pics, the first of which was a simple photoshop overlay on a suitably stark background. Hope you like.
Peter Cottingham 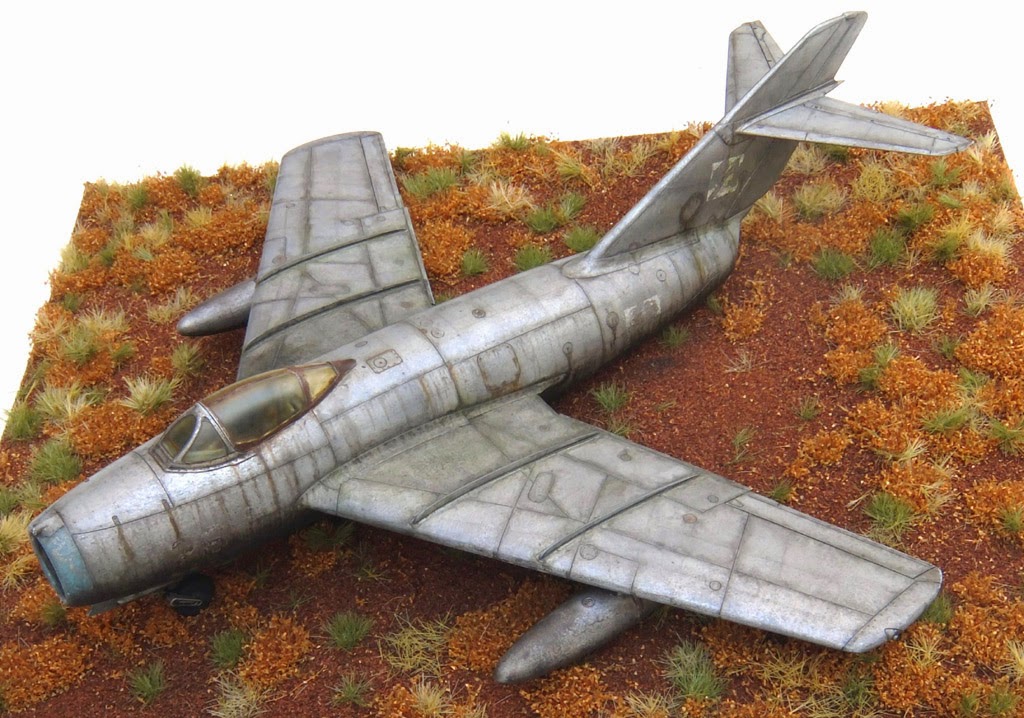 Email ThisBlogThis!Share to TwitterShare to FacebookShare to Pinterest
Tunnisteet: aircraft, other fantastic works